William and Kate, the beautiful pair of White-Tailed Kites, have once again successfully raised a brood of kites at Kimber Park!

A trio of young were hatched and raised this spring at the Mission Hills Tennis Club. This is the second nest of young kites raised here within about six months. William and Kate previously raised two young in mid-2011 on the Mission Hills Tennis Club property, with their nest in a Monterey Pine that loomed over the clubhouse parking lot. The young successfully fledged last Fall.

In order to give the raptors the best chance of raising their young without incident I chose not to publicize this year’s nesting until now. Raptors are notorious for abandoning nests when disturbed, so I waited until the young had fledged and left to find their own territory before writing this post.

William and Kate returned to Kimber Park in early March, 2012. The first photo was from late in the day on March 5th of this year, as one of the adults takes flight from its perch in the Redwoods on the Mission Hills Tennis Club property, near the entrance.

Nest construction began right away, in a pine tree not far from the tree they nested in in 2011. Here’s a twig being brought over to the nest a few days after the first picture was taken.

The adults were very vigilant and aware as they prepared to raise their young. Here one gives an interested observer a careful once-over.

The translucence of their backlit feathers give them an angelic glow as they gracefully soar. It does not accurately portray their demeanor, however. They are quite fierce when challenged. Last year one of the adults aggressively dove at and drove away a Golden Eagle, which was soaring over the nearby Fremont foothills just to the east of Kimber Park! Impressive behavior for a bird roughly the size of a large crow.

Although located in a suburban setting, their nest was well hidden. Here is one of the adults sitting on the nest in early May, 2012.

By the end of May three young were in the nest.

While shown sitting peacefully here, they were very noisy and demanding. Even though the nest was nearly un-viewable from the ground, they were so loud that many members of the neighborhood took notice.

Whenever a parent showed up with food, which seemed to consist entirely of small rodents, all heck broke loose on the nest! The incoming parent was immediately surrounded by all three young whenever they returned with food.

Here a parent has just landed with food. At this point the babies are maturing at a tremendous rate.

The 60-year old Redwood forest at Kimber Park is prime breeding ground for many local birds. This year a pair of American Crows was nesting very near the White-Tailed Kites. The crows, previously discussed here, had been aggressively defending their turf. One kite fledgling made one of its first flights directly over the breeding crow pair, which caused quite a ruckus. One of the crows attacked the juvenile. As shown below, the crow made it difficult for the young kite to defend itself, but the kite was up for the task.

By early June the young were flying in and out of the nest. They have the typical rusty breast color of immature young. The parents now fed the young without landing, as they encouraged the juveniles to hone their flying and hunting skills by making them grab their food from the extended talons of the parents. An amazing sight to see in the early morning skies above Kimber Park! 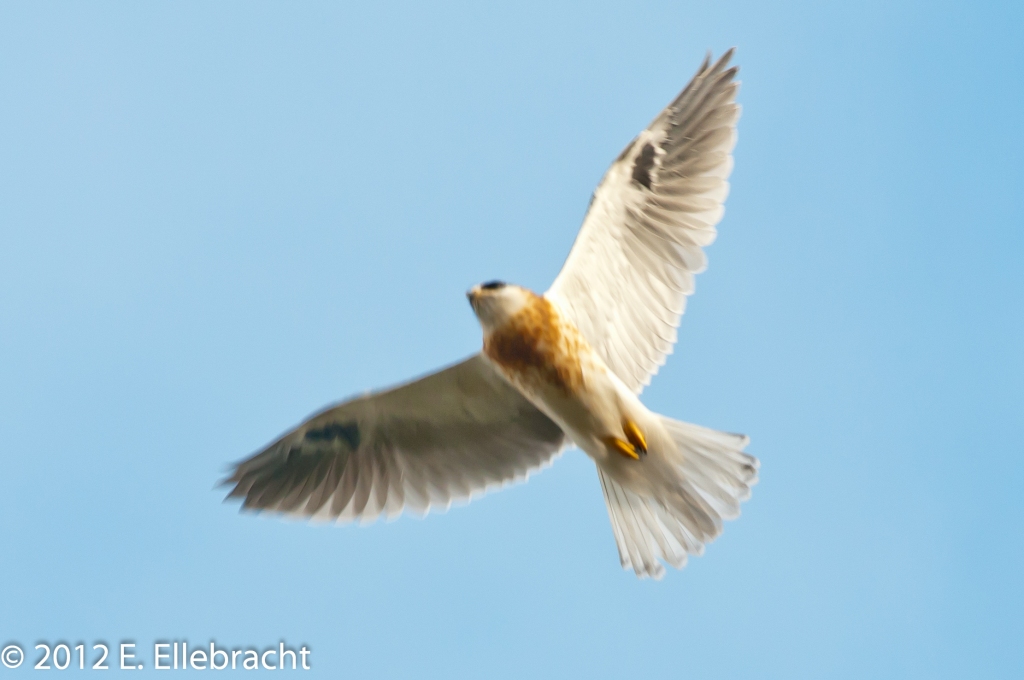 The young stayed in the Mission Hills Tennis Club Redwoods all through June and early July. They had become quieter and more secretive, but their occasional harpy-like shrieks would reveal their presence. Here is a late morning view of one of the juveniles flying among the Redwoods over the Mission Hills tennis courts in July, 2012. 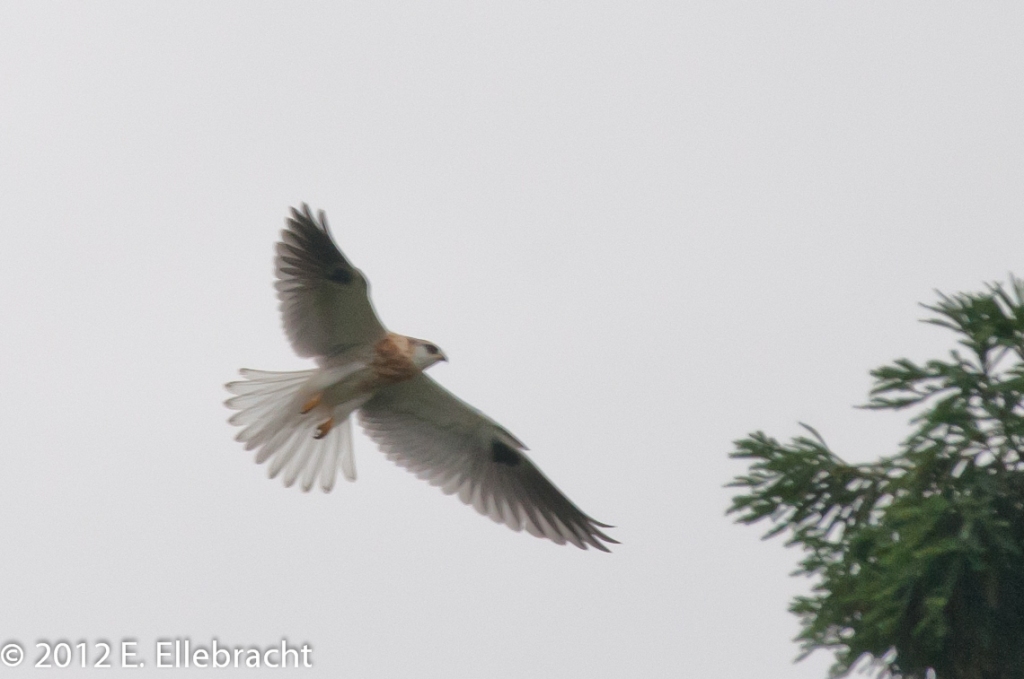 All three of the fledglings grew into beautiful young White-Tailed Kites. Here is one of the last views of them in the Mission Hills Tennis Club Redwoods, perched calmly together just after July Fourth, 2012. This tree is very near that shown at the top of this post. Over these months the young stayed on the western half of the tennis club.

Shortly afterwards William and Kate were seen flying with the young to the hills to the east, which is the most likely hunting ground for the kites.I have been missing them, but it is nevertheless  fun and exciting to see and share the diversity and concentration of wildlife that call the Mission Hills Tennis Club and surrounding Open Space home.

This is just one example of the wildlife that lives here. This amazing wildlife hotspot demands continued preservation. I have had the privilege of seeing firsthand the many example of different animals on the site over the first half of 2012 and hope to reveal more facets of this hidden gem in Fremont. Bewick’s Wrens, Nuttal’s Woodpeckers, Western Bluebirds, Wild Turkeys, and Bullock’s Orioles are just some of those observed breeding or raising young on the Mission Hills Tennis Club property this Spring. Hopefully life will permit further posts on these and others, including several raptors.

Thanks to all of Fremont for helping us get over 9,000 valid voter signatures on the Protect Fremont Open Space initiative. An immense task for a grassroots organization to take on, given the constraints of severely limited time and financing. We were successful because of the overwhelming desire of Fremont’s residents to protect our open space. Initiative signers literally sought us out, brought over friends and family, and would line up to sign on to help protect Fremont’s open space. Their purposeful participation was often quite humbling.

If you can, please attend the July 17th Fremont City Council meeting, at 7pm at the City Council Chambers, Building A, 3300 Capitol Ave, Fremont.

The City Council will have the opportunity to directly adopt the Protect Fremont Open Space Initiative and avoid having to explain why the citizens of Fremont felt compelled to change the laws under their stewardship. A large turnout will help underline the strength, determination and enthusiasm of the Save Kimber Park movement.

This will not only save the city money, it will also give those proactive City Council members an opportunity to show genuine leadership on behalf of the voters of Fremont and a leg up in the upcoming elections. The people of Fremont overwhelmingly supported this Initiative and now look to see their City Council support them in their efforts to better Fremont.

Leave a Reply. All Comments are moderated, so there will be a delay before it shows up. Cancel reply