If you ever want to see the Kimber Park wild turkeys in their full glory, make a visit on a Thursday morning in the wintertime. Who knew that they had a schedule? 🙂

Here’s one of the Kimber gobblers, caught mid-gobble this Spring, in the Kimber Park area (click on any image to see it at full resolution).

I have to admit that I normally have mixed feelings about the turkeys’ appearance. They have some tough competition, especially in the Kimber Park area. The hawks, kites and jays, seen every day here, are simply more appealing to my sensibilities (I don’t think I’m alone here. ;-> )

However I cannot help but find this guy’s looks amazing! The iridescence of his many feathers, the incongruity of the huge brown tail feathers and beautiful white and black striped wing feathers – a wild amalgamation. Just when you’re sure that nothing else could be added, he has a huge wattle, blue, orange and red skin colors on his head and neck, and a huge beard!

Are we done? Not yet. We need to add a crazy voice. Listen to the Kimber gobblers here:

It’s simply amazing to me that these guys live, wild, here in Fremont. As we’ve all learned, though, we have to work and battle to keep Fremont as we’ve grown to love it.

So on a Thursday morning in February, 2012, I came across the following outlandish turkey promenades:

Here they are, making their way from their nighttime roosts to the Kimber Park Open Space:

What I find fun, beyond the audacity of the wildlife event itself, is their sense of urgency. What is the rush all about?

A short time later they are on the walking path, part of the shared open space of the Kimber Park neighborhood. Well, Thursday is the day that the trash is collected in this neighborhood, which leads to this striking verbal confrontation between the noisy truck and the boisterous turkeys!

That video just brings a smile to my face whenever I think about it!

Later this Spring we were treated to a tremendous field of wildflowers on the Kimber Park Open Space, which the turkeys reveled in. Since they use this property as a breeding area, they can be seen on it year round. Here’s a Kimber gobbler on his way into the wildflower field earlier this year.

He went with a couple of his gal pals, escorting them about the meadow. He did keep an eye out for danger, as shown below. 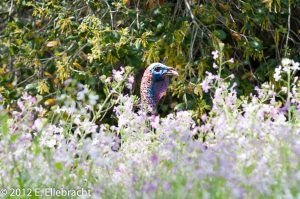 It looks like the turkeys are having a great 2012 in Kimber Park. 🙂

Sadly this is not true for the wildflower meadow, doomed to a short life this year. The owners of the property chopped them down and reduced the meadow to a field of dead brown stubble. In my opinion this is due to combination of causes:  1) a lack of management competence, which we see in general concerning all aspects of this property and 2) a desire to keep the property as visually uncompelling as possible, in an effort to justify development plans. This will be further explored in a future post.

If you don’t live in the neighborhood, you’re probably wondering what that cyclone fence and wildflower obliteration is all about. Real-estate speculators bought the property, fenced it and submitted plans to the  City for houses to be built exactly where these videos and photos were taken. All this, even though the Property Title specifically prohibits any building on the property. The fence, which was illegal, was finally taken down with pressure from the City, but the battle by the neighbors to protect their community continues.

Visit here to help protect the beauty and character of Fremont and for more information.