After waiting and watching for over a year, a seventh raptor species was recently photographed on the Kimber Park Open Space! It is somewhat ironic that this top predator is one most well-known of the resident raptors to Kimber Park residents. Why was it so hard to photograph? It’s nocturnal!

Here’s the list of Kimber Park raptors seen either breeding or hunting on the Kimber Park Open Space (in 2012 alone):

And now for number seven:  the Great-Horned Owl!

Anyone living or hiking here cannot help but hear their nightly hooting sessions, as they call to find mates and establish territory. The Kimber Park area is a prized owl habitat, with the many large trees, verdant meadows and foothills, all near one another.

Here’s a picture of a Great-Horned on the Kimber Park Open Space itself, surveying for prey, taken on April 30th, 2012 (click on any picture to see it enlarged): 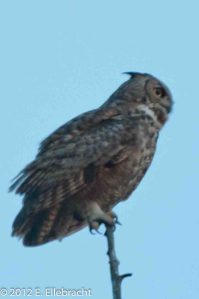 The owl’s nest was located earlier this year, at the top of a Eucalyptus tree. The owls themselves remained hidden for much of the year. Nesting season is upon us, and the Great-Horned is one of the earliest raptors to nest. They have raised two owlets that are nearly ready to fledge: 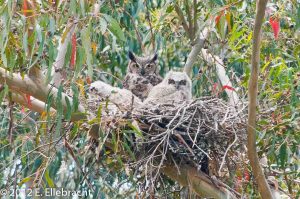 With the additional mouths to feed, the owls have begun hunting earlier in the evening and were thus active when they could be photographed.

They are absolutely silent alight. Here’s a recent picture of one of the parents flying at dusk recently. 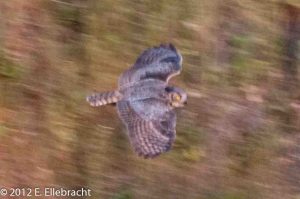 Should you soon take an early evening walk by the Kimber Park Open Space, especially when you are near the eastern half of the Mission Hills Tennis Club property, look to the tops of the Redwoods and Oaks. You have a very good chance of seeing one of the parents hunting for their nearly fledged owlets. If you are very lucky you might even see them plucking a hapless gopher or other rodent from the Open Space meadow.

Perhaps soon the babies themselves will be hunting in Kimber Park, before they find their own territories. 🙂